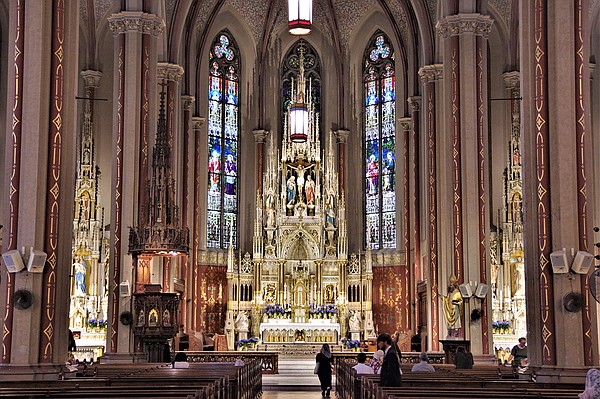 A small group with a big mission hopes to save the “Rome of the West” in St. Louis

ST. LOUIS — A group called “Saving Rome from the West” has formed in response to expectations of a historic restructuring of the regional network of Roman Catholic churches. Although small, it signals the kind of difficult discussions that lie ahead.

“Our goal is to prevent sacred spaces from becoming profane,” said Jason Bolte, 50, the group’s leader. “We will do what we can, canonically speaking, to block the sale of any church that fails.”

St. Louis Archbishop Mitchell Rozanski recently announced the planning stage for what will feature the “most sweeping” changes in the archdiocese’s history. Each of the 178 parishes in the Archdiocese is meant to be affected by the “All Things New” initiative.

Rozanski said there was no preconceived plan in place and he was seeking comment, but some members of the flock expect dozens of churches to merge or close, as seen in d other parts of the country that have also seen a drop in the number of active priests and Catholics.

The Archdiocese of St. Louis was once called the “Rome of the West” because it served much of the country. Today it covers 10 Missouri counties and the city of St. Louis.

Bolte, from Wentzville, said there were about six people actively involved in creating “Save Rome of the West” so far, but he expected the group to grow. He is also involved with the Church Militant Resistance Group, which seeks to maintain the orthodoxy of the Catholic faith. He attends St. Barnabus the Apostle, a church in O’Fallon, Missouri, which has a traditional Latin style of mass worship that has fallen out of favor with Roman Catholic leaders.

A recent pastor from St. Barnabus retired early after demonstrating “a tendency not to comply with the archdiocesan administrative policies and guidelines” from the archbishop, according to an official letter on the situation. This included “decisions regarding changes to the infrastructure” of the parish – “some of which were made without seeking the proper approvals, and some of which were made in direct contrast to the directives given” by Rozanski and his predecessor, the Archbishop Robert Carlson.

Bolte said he recognizes that some churches in the archdiocese were sparsely attended and less popular.

“That doesn’t mean you’re going to bulldoze it because nobody shows up at church,” he said. “You could make a chapel out of it. There are lots of other things you can do with sacred space.”

Besides chapels, he said, churches could be maintained as oratories and sanctuaries.

As “Saving Rome from the West” faces a new challenge amid ongoing restructuring, the Archdiocese lists many churches that have already closed, merged or been demolished over the years, as the center of the dwindling herd migrated west to St Charles County.

There are, however, examples of old churches being saved. St. Francis de Sales closed as a parish in South City in 2005 and reopened as an oratory run by the Institute of Christ the King Sovereign Priest. The archdiocese has closed the Immaculate Conception in tiny St. Mary, Missouri, 70 miles south of St. Louis. It quickly reopened in 2018 as a chapel or “sacred landmark” managed by the St. Mary Immaculate Conception Preservation Society.

“We keep our heads above water,” said board secretary Kathy Blum, who, as one of 12 children in her family, grew up in the church. “On Christmas Eve, we only had standing room.”

The Archdiocese still owns the property. The lay volunteer group pays for all the upkeep and for a retired priest from Belleville to celebrate Mass a few times a month. They have weddings, funerals and other events.

Blum said the archdiocese, under Carlson’s leadership when the arrangement was formalized, supported efforts to preserve the historic church building as a chapel.

“They wished us luck,” she said.

When asked Wednesday if Archbishop Rozanski supports these kinds of local efforts to save church buildings, the Reverend Chris Martin, who is helping lead the development of a restructuring plan, said in a prepared statement: “The proposed timeline for All Things New includes approximately two years of prayer, discernment and planning, including gathering data and feedback on all aspects within the Archdiocese through surveys, focus groups and personal interviews.

Martin encouraged Catholics in the Archdiocese to complete a survey that will be available throughout Lent.

How to partner with small businesses