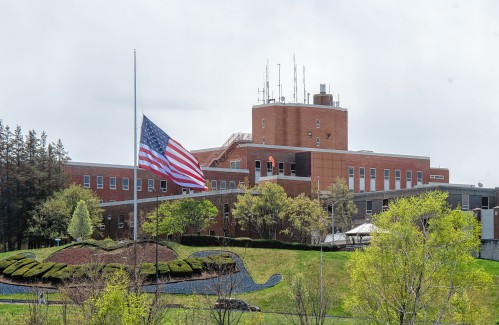 HOLYOKE – Governor Charlie Baker signed a bill in May authorizing $ 400 million in bail for the design and construction of a new soldiers’ house in Holyoke. Now a few entities are trying to add their voices to the discussion on how to run this project.

Dignity Alliance Massachusetts, a statewide grassroots coalition of advocacy and advocacy organizations for the elderly and disabled, and Disabled American Veterans, a nonprofit organization providing support to veterans and their families , argue for a small house model as opposed to building another large facility, which they say is outdated and unsafe.

People involved in these organizations want to see a small pod house model implemented in western Massachusetts and eventually the rest of the state, maintaining this will add comfort, dignity and goodness. -being general of veterans.

“It’s very difficult to understand the state’s choice to rebuild a 235-bed institution when that’s not even what the (US Department of Veterans Affairs) is prioritizing,” said Jennifer Kaplan, an attorney at Amherst and member of Dignity Alliance Massachusetts. â€œAnd that’s not what the state is doing for the rest of its aging population or people with disabilities. There is real pressure to provide care in homes and communities because that is where people want to be. And that’s where the veterans want to be.

The bill that Baker enacted also authorizes the issuance of $ 200 million general bonds to increase geographic equity and accessibility related to continuing long-term care services for Massachusetts veterans who are not. not primarily served by soldiers’ homes in Holyoke or Chelsea.

According to Priscilla O’Reilly, co-chair of communications for Dignity Alliance Massachusetts, the main focus would be on home and community services. The idea is that little houses will operate all over western Massachusetts within 30 to 45 minutes of all veterans.

The goal is for the main building of the Holyoke campus to be developed to serve as a hub for the operation of home and community services for the western part of the state and as a center for research, training and education. statewide that could be operated in partnership with the University of Massachusetts system.

â€œI want to be very clear, we are absolutely delighted that there are investments in the Holyoke Soldiers’ Home and necessary improvements to it,â€ said Coleman Nee, CEO of Triangle Inc., which partners with schools, community organizations and businesses to promote integrated school-to-work training and placement.

â€œObviously, this facility is older. It was built in the 1950s. The fact that the Commonwealth is willing to spend so much money on a facility there is really encouraging and obviously we are supporting investments in our veterans, especially one of this magnitude. .

â€œI think where we have an opportunity to influence here is around what is actually going to be built for all this money,â€ he said. â€œI think that’s really where the rubber meets the road.

Nee served as Massachusetts Secretary of Veterans Services from 2010 to 2015 and is a US Marine Corps veteran of Operation Desert Storm. He is also a member of the Veterans Homestead Advisory Board.

James Lomastro of Conway said the tiny house models are a 21st century approach to healthcare and offer more options, such as when and where to eat. He said they also have a lower risk of spreading the infection. He holds a PhD in Policy, Research and Administration from the Heller School for Social Policy and Management at Brandeis University and has 40 years of experience as a senior administrator in healthcare, social services, behavioral health and home and community services, having spent 20 years as a surveyor with the Commission on Accreditation of Rehabilitation Facilities in the United States and Canada.

â€œWe want this investment in the community. We want the jobs. We want the care of our veterans, â€she said,â€œ but it just doesn’t make sense the mechanism they chose for that, which is an institutional model when it isn’t. they are doing for the rest of the population, and it is against the state’s legal obligations under the Americans with Disabilities Act.

Nee said the designs for small module houses on the Holyoke Soldiers’ Home campus may better meet the needs of the area, and that may have a ripple effect. He also said the demographics of veterans are changing dramatically, with women and people of color increasingly making up the population. Older veterans are dying quickly and others are moving to warmer climates. Nee said Massachusetts saw a 43% drop in the number of veterans between 2000 and 2020.

â€œIt’s not just a Massachusetts phenomenon, it’s a national phenomenon as well,â€ he said. â€œIt really shows that there is no one-size-fits-all approach to long-term care. “

Medium and small businesses must define conditions for diversity