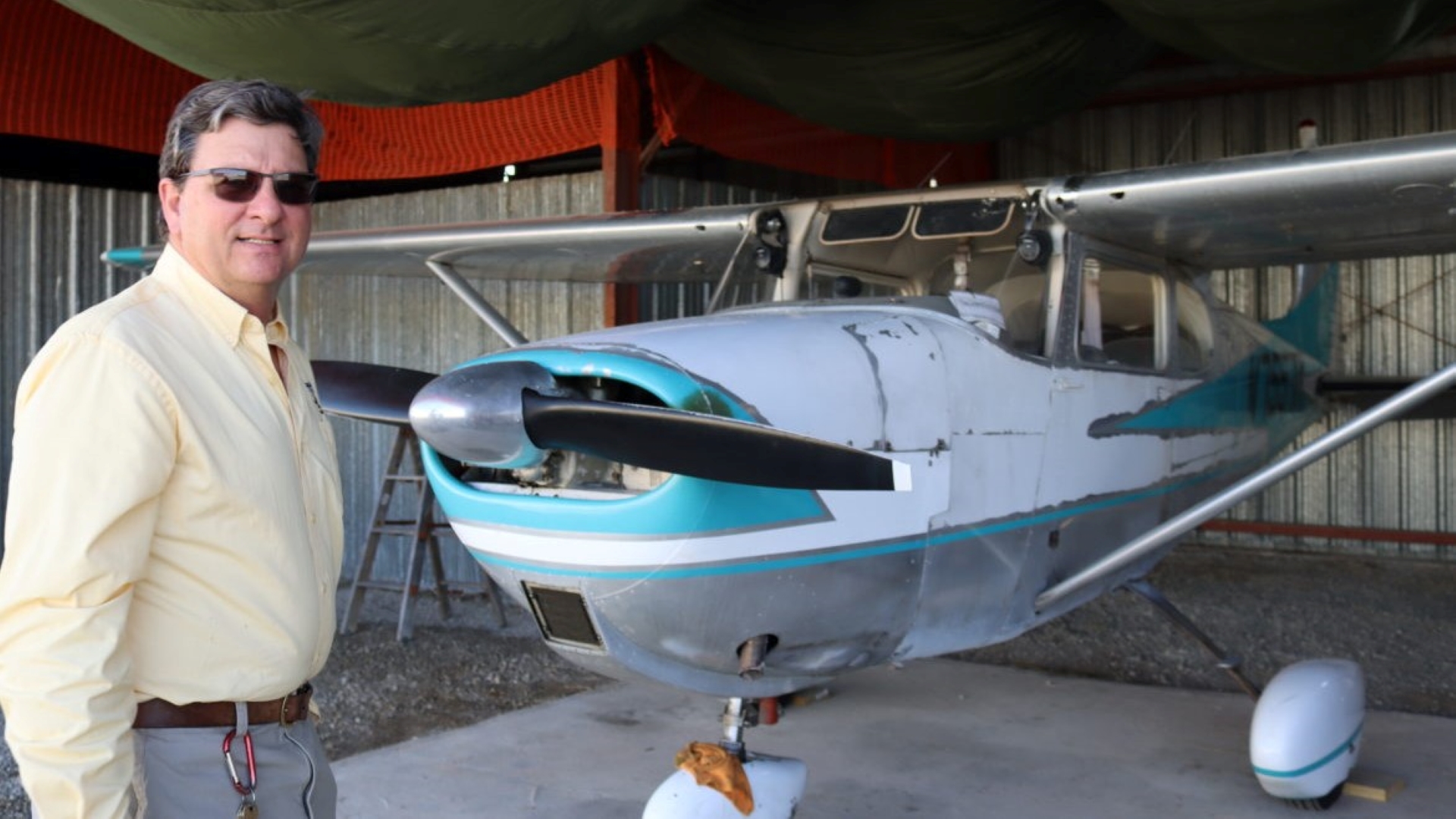 Image Credit Above: White learned to fly as a teenager at the Clinton airport where he now works. (Cami Koons | Flatland)

CLINTON, Missouri– Wallace White, director of operations at Clinton Regional Airport, sat down at a conference table in the airport’s small reception building to talk about his favorite things: airports and airplanes.

Later that day, he would fly his 1959 Cessna 175 from Clinton to Joplin to pick up his girlfriend’s grandson for the weekend.

the Missouri Department of Transportation estimates the airport’s economic impact is nearly $2 million a year for Clinton. Similar rural airports across the state have comparable economic impacts.

Dave Schubert, president of the Missouri Airport Managers Association (MAMA), said general aviation airports, while they may differ in size across the state, fill roughly the same niche in every community. These airports handle all air traffic other than military or commercial flights.

“They are absolutely an asset to the community,” he said.

Equipping a community with the ability to accept private jets can significantly affect the growth and development of a local economy.

Even in a city with a large commercial airport like St. Louis, where Schubert runs Spirit of St. Louis, the general aviation airport remains vital.

“The business jet is as much a tool as the computer,” Schubert explained. “What used to take a week can be done in a day.”

It’s also another way to bring people into a community. That might only be a few people a month at a small airport like Clinton, but that’s still more people heading into town, stopping for a bite to eat, renting a hotel room, or shopping at the store. It all comes down to the local economy.

Some airports, like those at the nearby Lake of the Ozarks, are primarily aimed at bringing people into town and fueling the tourism industry. White said that, as with everything, the role of an airport depends on its context.

But at the end of the day, the airport is what a road is most about: a necessary passage to the city.

According to United States Census Bureau, Clinton has just over 9,000 people. It is, however, a small manufacturing center, responsible for producing brake fluid for Tesla cars, wholesale cheese, Tracker fishing boats, ballots and high-end cabinets, to name a few. to name a few.

All of these industries are growing, and Mark Dawson, Clinton’s director of economic development, hinted that more are on the way.

Many of these manufacturing facilities are owned by companies outside of the Clinton area. Dawson knows full well that many executives come to Clinton Regional Airport to check on their belongings.

“The airport is not the first decisive factor (to attract businesses). But if they can fly in, it saves them an hour-and-a-half drive each way,” Dawson said. “It’s no different than what you see at (Kansas City International Airport). It’s just on a smaller scale.

White knows that these people also fly to his airport. But part of his job is to keep a low profile.

“But if a plane like that shows up at 10 a.m.,” he said, pointing to a picture on the table of a jet plane on the runway, “and five guys in suits get off , and they get in the car and go to town, and they come back at two in the afternoon and leave, they didn’t go to Dairy Queen, to get a dip cone.

According to Federal Aviation AdministrationClinton Regional sees about 10,000 flights per year.

Clinton Regional does not charge for landing, and all refueling profits go directly to the airport, not the city. It is therefore difficult to point to a net profit from the airport.

“A lot of times there’s infrastructure that may or may not absolutely pay off, like you might think of a company paying a profit,” White said.

What the airport guarantees is that companies don’t jump on Clinton as a place to work, just because it can’t accommodate the private jets its executives travel by.

“You won’t even know which company skipped your town because you didn’t have the right facilities,” White said. “Just because you build a good airport doesn’t mean you’re going to drop the industry on your knees.”

There are only three or four flights a year, which is not a lot. But for those few patients, those flights really matter.

Finally, the airport is an ideal intermediate refueling station for military aircraft that do not want to deal with the landing procedure on the base, private jets flying cross-country and small recreational aircraft.

Airports are far from cheap. Part of White’s 35-year plan includes building a million-dollar airport terminal, which on the face of it is quite a gamble for a city of just 9,000 people.

But what many don’t know is that these airports are 90% funded by the federal government. The city (or county) only has to set up 10% of the funds for their airport.

The terminal project is actually part of a terminal-specific subsidy program that would do the 95%-5% split. It’s part of a $5 billion budget Bipartisan Infrastructure Law Program aimed at developing airport terminals across the country.

Maggi said this split is one of the coolest parts of general aviation airports.

“It would be kind of ridiculous to let these opportunities slip away from you,” Maggi said.

Additionally, the airport is fully maintained by White and volunteers from the Clinton Airport Association, the local nonprofit that started and operates the airport.

The goal of a rural airport, Schubert explained, is always to be as self-sufficient as possible. That’s why you’ll usually see airport managers, such as White, mow the grass or show up at odd hours to refuel passing planes.

It is also the manager’s job to apply for government grants and plan for the future well in advance. White’s current plan for the airport extends to 2044.

When construction of the airport began in 1965, plans included seeding the runway with grass and installing cattle guards on the access roads.

In other words, the airport has been well supported by the city, even though not everyone in town understands.

There will always be those who oppose any kind of tax increase or allocating money to something they don’t understand.

“You just have to have faith that it’s going to work,” White said. “You don’t want to live in a rural community and live like it’s 1965.”

He understands the nostalgia, however, and remembers what Clinton was like in the 1960s. He grew up in the city during that time, and in the 1970s he flew his very first plane. He took off from Clinton Regional Airport as part of a Boy Scouts Explorer program.

From there, he became addicted to flying and would later teach his son to fly from the same airport.

White sees most of its surrounding general aviation airports from a similar perspective. They’re fine, but sometimes have to fight locals who don’t want the town to change or get too big.

This is a problem that rural towns face in many ways, not just in the aviation sector.

“I don’t want to deal with all of these people, but you have to find a balance between (staying small) and growing the community so your kids don’t have to move away to find work,” White said. .

From his role as president of MAMA, Schubert hears a growing number of airport managers around the state reporting the same thing — that their communities are becoming less and less supportive. But he only remembers one airport, in St. Clair, Missouri, closure over the past two decades. So it’s not too bad.

“It’s by far one of the best assets a community can have in their arsenal,” Schubert said. “Overall, they’re something in a community that you want to support.”

Cami Koons covers rural affairs for Kansas City PBS in cooperation with Report for America. The work of our Report for America corps members is made possible, in part, through the generous support of the Ewing Marion Kauffman Foundation.

Thank you for subscribing!

Check your inbox, you should see something from us.

A small group of investors believe in crypto. Now they just have to convince everyone.