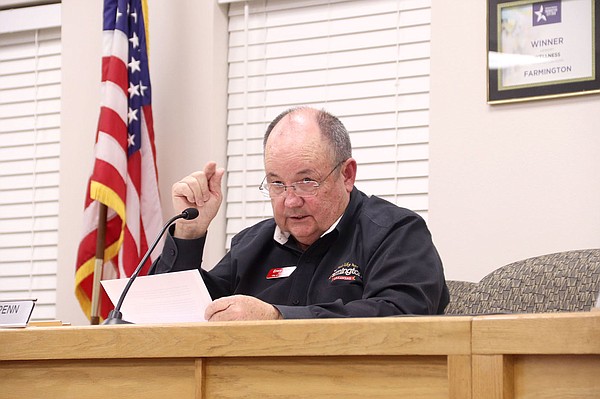 For the remaining months of 2021, Farmington issued 60 permits in April, 58 permits in June and 45 permits in March. February was the lowest month, with six permits.

Mayor Ernie Penn highlighted residential growth in Farmington during his annual State of the City Address, delivered at the Jan. 10 city council meeting.

“Our residential growth is extremely active with residential lots approved, under construction or available for new home construction and lots proposed or in planning,” Penn said. “This growth shows the confidence that builders have in our city, our school system and that Farmington has become a very attractive place for families.”

The 429 single-family permits in 2021 are worth $112 million, or the estimated cost of homes in square feet, Penn said.

Additionally, in 2021 the city issued 28 multi-family permits for duplexes, or 56 units, worth $11.7 million and six commercial permits worth $6.8 million.

Penn said he believes Farmington’s population will grow to 10,000 over the next three to five years, depending on housing growth. The 2020 census showed Farmington with a population of 7,584 people, a 27% growth in population from 2010 to 2020.

“Farmington is no longer a small town,” Penn said at the council meeting. “I know a lot of people don’t like it because we have growth, but Farmington isn’t a small town anymore, and we’re just managing that growth.”

In total, the city issued a total of 1,814 permits in 2021, which includes mechanical, plumbing, heating and air, and sign permits.

Penn called out Bramall at the board meeting, saying, “You gotta give that man (applause) a big hand, Rick Bramall over there, because that guy’s been working non-stop. He’s doing a great job. He has great knowledge.”

To help Bramall, the city is training two more employees.

Penn opened his State of the City address by thanking city employees for their dedication and commitment. The year 2021 continued to present challenges due to the covid-19 pandemic, and city staff with administration, police, fire, public works and library were quick to s adapt and overcome challenges, said Penn.

“This increase provides our city with funds to support the expansion of our municipal services and for capital improvement projects to begin and be completed without disruption due to financial need,” Penn said.

Capital improvement projects completed in late 2020 and 2021 included the expansion and renovation of the library and the expansion of the police department. Road projects included widening Double Springs and improving drainage from Main Street to Rheas Mill Road, paving Richmond Road and repairing drainage on Rainsong Road.

For 2022, the city plans to improve drainage on Garland McKee Road to benefit the Meadowsweet Subdivision, cap Southwinds and Jim Brooks roads with the help of $300,000 state assistance, and rehabilitate the Double Springs Road Bridge. The construction project to expand and improve the Arkansas 170 is also expected to start in 2022, he said.

With continued community growth, Farmington will need to add police and fire personnel, “so that our residents have the added security that Farmington is a safe place to live”, as well as a commitment to expanding recreational facilities. and trails, Penn mentioned.

Penn said he will encourage the city, school district and chamber to work together to help Farmington become a more attractive place for families and businesses.

He concluded by thanking the citizens of Farmington for their support of the community.

“God has blessed our city, and we should be grateful for those blessings every day,” Penn said.