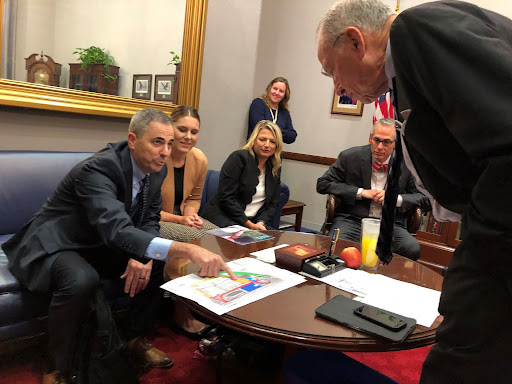 A group of eight from the Greater Des Moines Partnership met with members of the Iowa Congressional delegation last week to present the group’s federal political agenda.

The trip replaced the larger DMDC trip, which had been canceled due to the increase in coronavirus cases and the spread of the delta variant. Despite the small group, Partnership leaders said they believed the trip was an effective strategy for communicating with Iowa officials and senators about the region’s priorities.

And while not scheduled, the visit precedes two big votes in Washington this week. Congress must vote on a A trillion dollar infrastructure bill Thursday. Lawmakers also face an Oct. 1 deadline to extend federal spending or risk shutting down the federal government.

Tauscheck said that although it was a small group, they felt they were effective in getting the message from Central Iowa to Washington.

“We were delighted to be able to take a small group to Washington to meet face-to-face with each member of our delegation, and we specifically championed our future priorities,” she said. â€œWe heard from every member of our delegation that they were happy to meet with us because they understand the voice that the Partnership represents in the Des Moines area. We also know that each of these members of the delegation identified the priorities that the Partnership also has as priorities for them. “

Tauscheck said there were some advantages to having these conversations in small groups.

“It certainly gives us the opportunity to have more frank discussions at the moment, and we have been very satisfied with each of these meetings,” she said.

Andrea Woodard, Senior Vice President of Government Relations and Public Policy of the Partnership, said that despite changes in the national political landscape and the resurgence of the coronavirus, federal political priorities identified last summer continue to be key priorities for leaders in central Iowa.

â€œWhile circumstances have changed over the year, conversations in Congress do change, I’m not sure if there could have been a more appropriate time for the band to be out there with all these decisions coming more. late this week, “she said.

Representative Cindy Axne, who represents Iowa’s 3rd Congressional District, which includes Des Moines and Polk County, said the timing of the partnership’s trip could not have been better.

“Although the visit of the Greater Des Moines Partnership this year has been rescheduled this year, it turned out to be a good time as they surrendered just days before the House passed legislation that contained many significant investments. in Iowa’s infrastructure, â€Axne said. noted. â€œThe bill we will be voting on this week actually addresses a number of priorities that we discussed at our meeting, including broadband connectivity and the revitalization of roads, bridges and airports across the country. Iowa – and I was able to discuss these and other priorities with the people who came to Washington.

Axne said hearing from the Partnership and other Iowa residents only strengthens his belief that Congress must address the infrastructure issues facing the state.

â€œI am confident that over the coming weeks we will also move forward with legislation that will create new jobs, support small businesses in Iowa, and invest in essential supports for our workforce such as child care. ‘children to help grow our economy in Des Moines and central Iowa,’ she said.

Senator Chuck Grassley said meetings with groups like the Partnership, whether in person or virtually, helped him get a feel for the issues facing people in central Iowa.

â€œFace-to-face meetings are the best way to get together, and in the midst of a global pandemic, I appreciated the opportunity to welcome a small group into my office,â€ Grassley said. â€œVirtual meetings have become commonplace and I find them productive as well. Any way I can connect with the Iowans is OK with me.

Woodard said the trip, while timely, only builds on the conversations local officials have with the Congressional delegation throughout the year.

She said taking small groups to Washington will be something the Partnership sees as a future strategy when upholding regional priorities.

â€œHaving some of these intimate conversations was incredibly valuable,â€ said Woodard. â€œThere’s a lot of these conversations that take place on the big trip, they’re just in a different kind of context. And this small-group tour is absolutely something that we will look to in the future as a strategy that can make sense to get the ball rolling when we talk about priorities. “