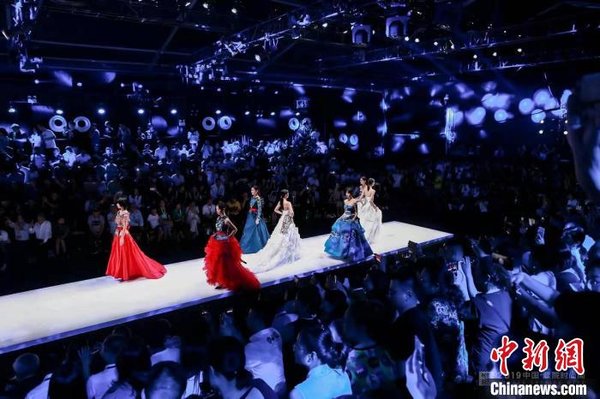 Puyuan, a small town that was previously not used to raising sheep in eastern China’s Zhejiang Province, has become the world’s largest wool sweater mall, helping local residents to walk at the same pace towards common prosperity.

Puyuan’s woolen sweater business recorded combined transactions amounting to 108.9 billion yuan (about $ 17.1 billion) in 2020. The city is home to 20 shopping areas and more than 13,000 sweater stores, with over 200,000 people working in the industry.

The woolen sweater industry in Puyuan began to take shape at the very beginning of the reform and opening up. At the time, the townspeople set up stalls in the streets and sold their wares, according to Wu Bingming, president of the Zhejiang Wool Sweaters Association.

Then, after raising 580,000 yuan, the city built its first woolen sweater and yarn sales market, which served as a prototype for today’s large-scale woolen sweater market. Since then, a large number of merchants have moved in and out of the city, making it the largest woolen sweater mall in the whole country.

Today, traders in the city have jumped on the bandwagon for live e-commerce and cross-border e-commerce in hopes of selling their products to more places around the country and around the world.

Wang Gaidi, 52, is one such merchant who has joined live e-commerce to sell woolen sweaters. Attracted by Puyuan’s large-scale sweater industry, Wang left her hometown and started her business in the city in 2016. Within a few years, Wang became a popular streamer with over a million subscribers on a live streaming platform. Each month, its total sales volume through live streaming sessions has now reached about 5 million yuan.

Wang’s success is the epitome of the city’s booming woolen sweater industry and live e-commerce. In the first 10 months of 2021, the Puyuan woolen sweater market registered a combined trading volume of over 89.7 billion yuan, of which 39.6 billion yuan was through e-commerce platforms.

Zhu Jiaqi, general manager of Puyuan Textile City in the city, set up an e-commerce live broadcast base in collaboration with the popular Chinese short video platform Douyin in December 2020, helping businesses and traders to adopt direct marketing techniques. So far, the base has achieved a total sales volume of over one billion yuan through live broadcasting.

Puyuan’s woolen sweater industry made a fortune for 200,000 residents. In 2020, the city’s 13 administrative villages saw an average annual income of 5.62 million yuan. The per capita disposable income of the city’s rural residents reached 42,017 yuan.

According to Yu Wujun, party leader of the city, Puyuan aims to develop an industrial cluster of woolen sweaters with a gross output value of over 100 billion yuan and a combined online and offline transaction volume exceeding 200 billion yuan. yuan by 2025.

Does the small house policy discriminate on the basis of sex, birth or social origin?