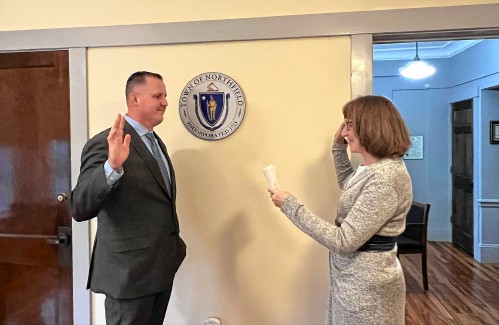 NORTHFIELD – Growing up in a low-income family in Brattleboro, Vermont, and later in Turners Falls, Jon Hall remembers the positive interactions he had with local police officers. This experience, coupled with his desire to help people, shaped his decision to pursue a career in law enforcement.

December 6 marked the next stage in his career for Hall, when he was sworn in as Chief of the Northfield Police Department. The former lieutenant in the University of Massachusetts Amherst Police Department said he had been considering applying for a chief position for some time when the opportunity arose at Northfield.

â€œIt felt like it was the right time to take a step,â€ he said. â€œI wanted to work in a small growing town.

Hall, who currently lives in Turners Falls, said he plans to move to Northfield with his two daughters, Avalyn, 9, and Quinn, 7, who attend Northfield Elementary School. With a 7 a.m. to 3 p.m. team Monday through Friday, compared to his former 7 p.m. to 3 a.m. team at UMass, he can’t wait to get more involved in his daughters’ lives, like going to their dance recitals and see getting on and off the bus.

During his first two weeks on the job, Hall said Sgt. Alexander Pirozhkov took him under his wing. Pirozhkov served as interim chef following the retirement of former chef Robert Leighton on July 8.

â€œIt’s been awesome,â€ Hall, 40, said of his time with the Northfield Police Department this month. â€œThe police here are all amazing, very professional. They serve this city well.

The department consists of Hall, Pirozhkov, one full-time officer and 10 part-time officers. To illustrate the â€œincredibleâ€ work of his officers, Hall cited a few calls to service over the past two weeks:

â–  Constable Jakob Davidson helped locate a young runaway in the wee hours of the morning on a cold night.

â–  Constable Oleg Cobileanschi arrested a fugitive from Vermont on charges of domestic violence and stalking.

Hall said working in a small community like Northfield provides a good opportunity to meet people, develop relationships and get to know people on a more personal level than it would at UMass, where students arrive. and continually graduate.

â€œI would love to meet everyone,â€ Hall said, adding that he had visited the school and local businesses to introduce himself. â€œI am here to support them and listen to them. I take constructive criticism really well.

“It is applicable to what I do now, but also later in my life if I find another job, I would like it not to be in the police force,” he explained. “I saw myself as a mental health counselor or something to that extent.”

His first job as a full-time police officer was in Brattleboro, Vermont, in 2004. He started working at UMass in 2007, moving from patrol officer to detective, sergeant and finally lieutenant.

While at UMass, Hall experienced some interactive programs he wants to implement in Northfield, such as a summer adventure academy for young people or a citizen police academy.

â€œThe citizens of the police academy come once a week and learn about constitutional and criminal law,â€ he explained, â€œeverything from the equipment to the calls we make to the police history “.